Stand with our Paiute relatives

Recently, I was contacted by a Heiltsuk member living in Oregon for a response to the crisis on Paiute lands. It doesn’t take much digging to familiarize yourself with the conflict: An armed white militia is occupying a federal wildlife sanctuary to protest the US federal government’s “tyranny” and issue a call to arms to “patriots” everywhere.

There are many layers to unpack, but one is not yet getting the attention it deserves. Let’s start with this question: Who is the victim of land theft here?

The area being occupied by this white militia is sacred to the Paiute people. Paiute leadership has made clear statements that the militia is desecrating their ancestral lands. This is where Paiute people gather medicines, hold ceremony, and live their identity as people who are inseparable from the lands where their people have lived for thousands of years.

Tell me how this armed standoff, at its heart, an not issue of colonialism. Too many people are responding to the Bundy militia by tagging them with joke names or just ignoring the issue because they think it’s unimportant. If you think this is humorous or irrelevant, I can only assume you’ve never suffered the grief of displacement and land theft.

One criticism I keep seeing is that Bundy and his followers benefit from the very federal government they’re protesting in the form of federal loan guarantees. People can’t get enough of the irony. Frankly, I don’t care about that. Let’s talk about how they’re also benefitting from colonialism, white supremacy, and the deep pain of Indigenous peoples whose lands were stolen from them from the US federal government.

To all my Indigenous brothers and sisters, and everyone who purports to stand with us:

The absolute least you could do right now is lift up the voices of Paiute people and recognize that ignoring or undermining the seriousness of this issue is totally antithetical behaviour in anyone who claims to care about Indigenous sovereignty or to practice allyship to Indigenous people and causes.

Bundy, the militia’s leader, is preaching to the Paiute about oppression and co-opting their concerns to spin media for his standoff. How can people stand by while a white militia not only fails to acknowledge how they benefit from a society that oppresses Indigenous people – but also desecrates Indigenous land and appropriates the messages of Paiute leadership to bolster their own support?

I can tell you right now, if someone did this in Heiltsuk homelands, I’d be the first one lining up to deliver them a big, fat reality check.

This issue is simple. In the words of 11 year old Ashlin Begay, quoted in The Guardian yesterday, “If people are giving away land here, they should give it to us,” she said. “It’s ours. It’s always been ours.”

Stop letting Bundy and everyone like him get away with their oppressive tactics. Lift up the voices of the Paiute people who are tied to this land in every aspect of their being.

This Heiltsuk is standing with our Paiute relatives. I hope you are too. 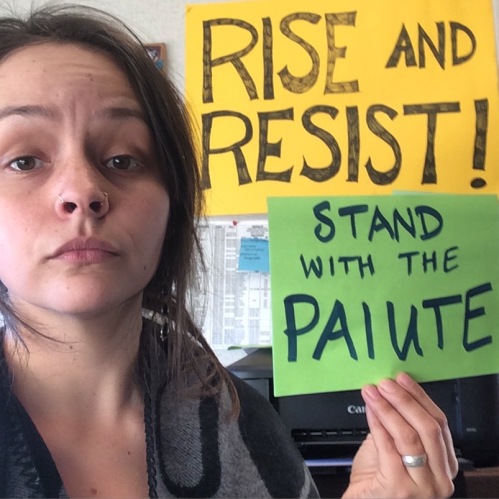 Here are just a few things you should be elevating in your newsfeed right now instead of cracking jokes or just scrolling by:

Oregon standoff: Militia group has ‘no right to this land,’ native tribe says